The Belgian prime minister Alexander De Croo opened the first edition of the conference FACETS 2022 – “Diamonds in The Age of the Consumer”, this Wednesday, September 14 in Antwerp, refusing again sanctions on Russian diamonds, defending the Belgian position that "sanctions should focus more on the agressor, than ourselves".

The event counted with the presence of the global diamond and jewelry industry as well as high-level politicians from Europe, Africa and Asia gathering in the Handelsbeurs building. Tomorrow is the last day of the conference, which aims to open a dialogue with diamond sector stakeholders through panel discussions, presentations, and networking events.

The conference celebrates 575 years of Antwerp playing a critical role in gathering industry stakeholders from around the world, when the city took over from Bruges as the diamond capital of Belgium.

No sanctions on diamonds

Once more, the Belgian PM supported the Belgian diamond sector. He defended that if Belgium gives up the diamond trade to impose sanctions on the Russian market, other countries where the Belgian high standards are not in use may run with it.

The main Russian company, Alrosa, currently has 27 mining operations in Russia, mainly in the Yakutia region. It also holds 41% of Catoca mine shares in Angola, which is the 4th largest on earth. Alrosa has exploration activities in Angola, Zimbabwe and the Democratic Republic of Congo (DRC).

The United States of America has applied sanctions over Alrosa and the diamond sales are now 50 million to 100 million dollars below pre-war levels.

Interviewed by the Belga News Agency, De Croo does not think Belgium should follow the US footsteps and apply sanctions on the Russian diamond market as well. "We see this war in Ukraine has an impact on the European economy and it's hard for our citizens," he said. De Croo highlighted the "tremendous" efforts of the European population taking the burden of the high energy prices, an effort that is currently harder on Europeans than Americans.

"In the meantime, diamond trade here in Antwerp has adapted over the months of this conflict and choices have been made. If you look at the situation today and the volume of trade with Russia compared to before the war, we are in a new world and these are deliberately choices that had been made in Antwerp," he told Belga News Agency. 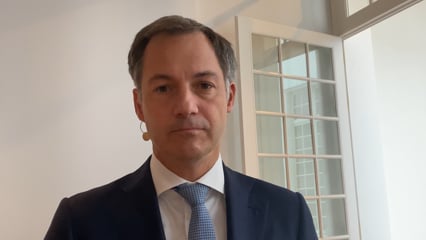 The president of Botswana Mokgweetsi Masisi also suported the diamond sector in his opening speech, highlighting "the way" diamond revenues are used to finance health care, education and infrastructure.

Botswana is the world's largest producer of rough diamonds in terms of value and one of the largest suppliers of diamonds to Antwerp. Nevertheless, Masisi ​ expressed that nowadays diamond consumers are aware of "conflict diamond" issues.

The Antwerp World Diamond Centre (AWDC) is currently developing a blockchain pilot project named “OrigemA” in the Democratic Republic of the Congo (DRC) to trace artisanal diamonds from its origin to the final consumer.

Asked if the blockchain technology could eventually bring a solution to help the diamond industry to trace Russian diamonds and facilitate sanctions on their market, De Croo admitted he was not familiar with Antwerp's project.

"I don't know the details of that specific project, but in general I'm a big believer of how technology can help us improve our processes. Antwerp has always been a leader in improving the state of industry, it pulls the standards upwards," he told Belga News Agency.

"Using technology is a good thing and Antwerp has always been the one that has set the standards and the rest of the world has followed," De Croo added, stating that Belgium is committed to keep playing this role.

The Facets conference will also host the launch of the first carbon footprint certificate for diamonds. This has never been done before by the diamond industry and it will bring traceable sustainability solution to the sector. 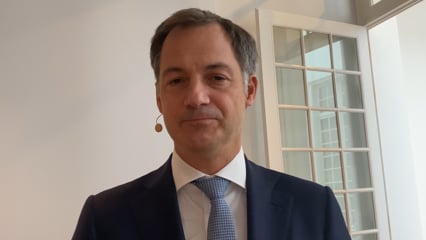